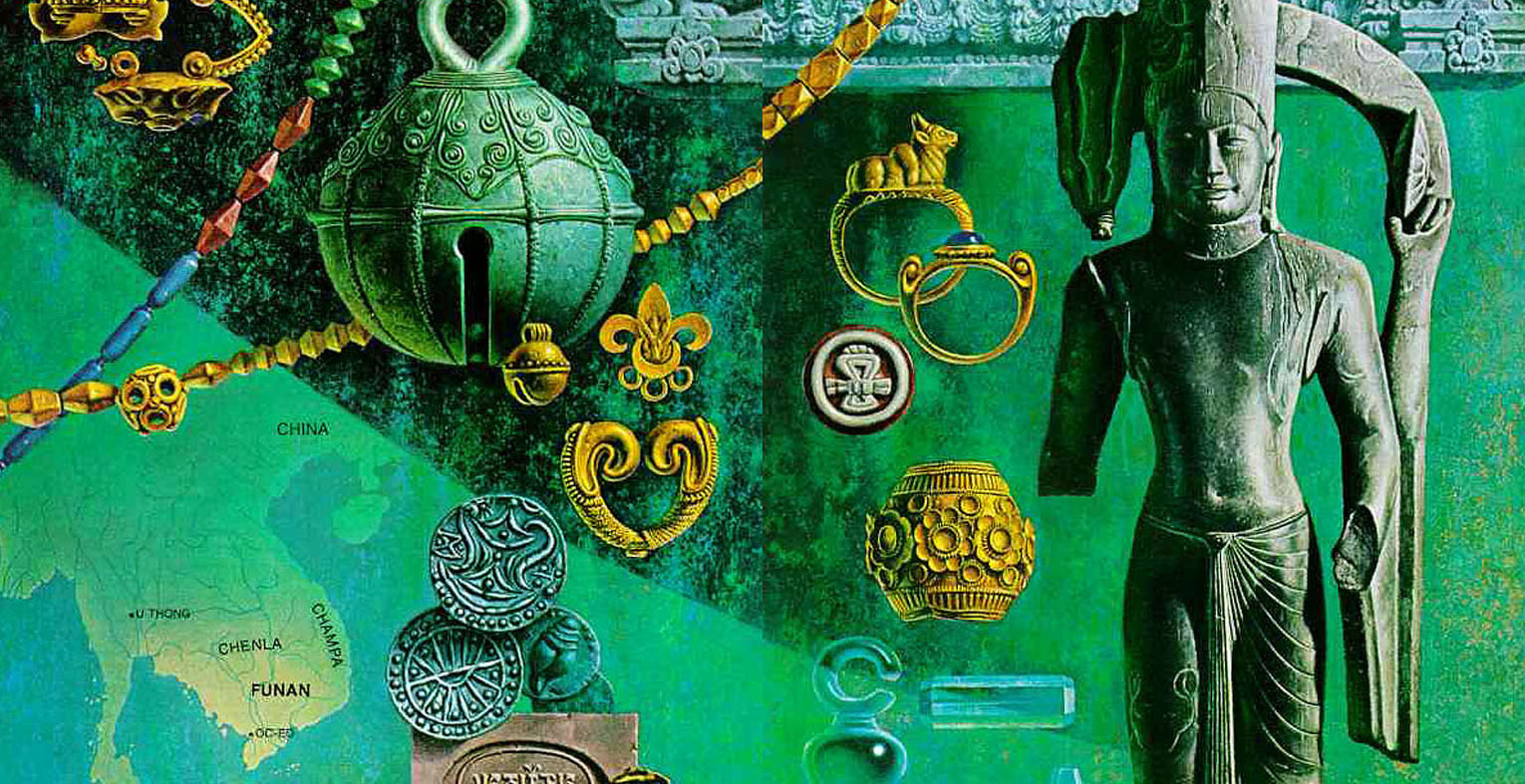 In 150 AD, the Roman geographer and mathematician Ptolemy plotted a map of the ancient world in his influential work Geography, pinpointing the port of Kattigara east of the Golden Chersonese (Malay Peninsula) located in Magnus Signus (the Gulf of Siam). Kattigara – located in modern-day Ba The Mount, a small mountain range of rugged granite formations in An Giang province, Vietnam – is widely accepted by scholars as the archaeological site of Oc Eo. Almost 2,000 years ago, Oc Eo was a thriving marine port in the ancient kingdom of Funan, the first civilization in prehistoric Southeast Asia that flourished from the 1st to 7th century AD. Funan extended across the lower Mekong Delta region of southern Vietnam and Cambodia, and possibly parts of Thailand and Malaysia.

The first excavations of the site by French archaeologist Louis Malleret in 1944 revealed the ruins of an ancient marine city outlined by an intricate network of canals crisscrossing the low flatland of the Mekong Delta, connecting residential areas and Angkor Borei in Cambodia, once the capital of Funan. During its existence, Funan was an opulent maritime empire (thalassocracy) and its bustling port of Oc Eo served as an important stopover in the international trade routes between the East and West, harboring ships and merchants from China, India, the Malay Peninsula, and the Mediterranean.

Oc Eo is largely still an enigma to the modern world. Thousands of excavated artifacts – including earthenware, buff-coloured ceramics, elaborate ornaments and jewelry made of gold and gems – are clear evidence of an advanced civilisation with a remarkable expertise in jewelry, pottery making, and metallurgy.

Oc Eo's residents, likely mon-Khmer or Austronesian in origin, were described as a sophisticated people who lived in stilt houses near the waterways and owed their prosperity to the port’s dominance in the sea trade routes, backed by an agrarian surplus cultivated in the fertile silt of the Mekong Delta. Artifacts from different cultures, such as Sanskrit-inscribed stone steles and trade items from Rome, India, and China, attest to Oc Eo’s close trade relations with other civilizations. Notably, the many statues of Hindu deities and symbols unearthed in the trans-Bassac region indicate a strong influence of Hinduism and Buddhism adopted through cultural exchange, which peaked from the 4th century until Funan’s demise in the 7th century AD.

In this archaeological journey, travel back in time and witness the remnants of this enigmatic civilization at ancient relic sites along the lower Mekong River and learn about this lost legacy from an archeological specialist. Visit the “four-handed Buddha pagoda” nestled in the shade of thousand-year-old trees in Ba The Mount, which contained one of the oldest statues of Vishnu found in the kingdom of Funan. Moving to the central Highlands along the banks of Dong Nai River, explore a religious and cultural sanctuary with an irresistible aura of mystery. Near the Vietnam-Cambodia border, marvel at the UNESCO World Heritage site of Angkor Borei, the cradle of Southeast Asia’s earliest kingdom and predecessor of the Angkor civilization